to be published soon

A friend of mine, Luca Tateo invited me to contribute to the following book, which will be published soon. 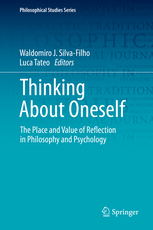 I wrote a chapter that focuses on the bodily origin of self-reflection. Though one tends to presuppose that reflection is something purely mental as Descartes did, actually it has bodily origin. Here's the title of my chapter and the abstract. I hope you enjoy it.

My aim in this chapter is to give a genetic account of self-reflection based on phenomenology and other related cognitive sciences. When dealing with the body in its relationship to the self, the traditional phenomenological approach emphasizes the subjective aspect of the body: “I” perceive the world through and from my body, and “I” act in the world through and with my body. In general, this embodied self is invoked to explain how the self is deeply rooted in pre-reflective actions. In this chapter, however, I attempt to elucidate how the embodied and pre-reflective self begins to reflect itself through bodily experiences. My view is that the origin of reflection is found not in contemplation by the detached mind, but in experiences of one’s own body as an object. One’s own body appears not only as a subject of perception and action but also as an intentional object (“body-as-object”). This ambiguity of the body precedes and underpins psychological experiences of self-reflection. In addition, the body-as-object appears as an object not only for oneself but also for others. Thus, self-reflection is not intrapsychically limited but has extended aspects in intersubjectivity and social cognition. Drawing on arguments by Husserl and Sartre, I explore experiences of empathy and social anxiety as socially extended experiences of self-reflection. This analysis suggests that it is only the self-reflective agent who can truly serve as the social agent and vice versa.