self in Japanese culture

A new book on cultural psychology was recently published by Routledge. 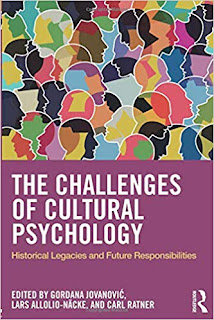 The book covers diverse aspects of cultural psychology - its historical backgrounds, present and future. I also contributed a chapter on the self in Japanese culture, attempting to go beyond the cultural dichotomy such as "Western" and "Eastern." Here is the chapter title and the abstract.

Chapter 17: The Self in Japanese Culture from an Embodied Perspective (Shogo Tanaka)

[Abstract]
The main aim of this paper is to consider the self in Japanese culture from an embodied perspective. Since early 1990’s, the discourses on the embodied mind have brought a radical change in the sciences of mind, including the notion of the self. In the following argument, first, I briefly describe the basic aspects of the embodied self, the notion of which was derived from the embodied mind paradigm. Then, I examine the discourse on the self in cross-cultural psychology that focuses on the differences in the self between the West and East, including Japanese culture. In the extant literature, it is widely acknowledged that the self in Eastern (or more widely, non-Western) cultures has the characteristics of being “interdependent” and “collective” in comparison with that in Western cultures. In addition to this, the self in Japanese culture has been described as “relationship dependent.” Finally, I give an account of the same characteristics from an embodied perspective in order to find a path to an understanding of the self beyond cultural dichotomies, such as “Western” and “Eastern.” If the self is inevitably embodied, such a self could be constituted as either “individual” or “collective,” “independent” or “interdependent,” regardless of the cultural background.


If you are interested in reading it, please let me know. My chapter may be of interest for those who hope to understand the connection between cultural issues and the embodied self.