Classic experiment by Held and Hein

The well-known experiment on vision performed by Held and Hein: They harnessed a pair of kittens to a carousel (see the figure). One of the kittens was harnessed but stood on the ground and was able to rotate around by itself, while the other, being placed in the gondola, was only moved passively. As the one kitten walked, both moved in the circle. 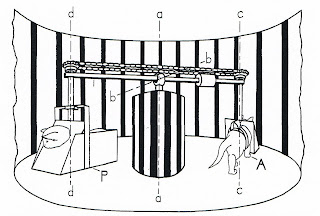 [Held, R. and Hein A. (1963). Movement-produced stimulation in the development of visually guided behavior. Jouranal of Comparative and Physiological Psychology
56(5): 872-876.]

None of them have received light before the experiment, as they both were reared in darkness from birth. The point of this experiment is that both kittens were made to learn to see the world, receiving the same visual stimulation. The difference was that the one could move actively, the other was moved passively.

According to Held and Hein, only the self-moving kitten developed the normal visual perception. The other one, which was deprived of self-actuated movement, could not develop the depth perception. For example, it doesn't blink to an approaching object. In its visual field, I think, something looks 'bigger' when approaching, but never looks 'nearer'. The change of patterns in the visual field does not have the spatial meaning for the kitten.

The self-actuated movement is necessary in order to develop the normal visual perception with depth. Our movement in the world, the movement from here to there or there to here, gives the dimension of depth to mere visual sensations. Movement is the key to understanding the vision.
Posted by Shogo Tanaka at 1:53 AM