a brief guide: "Ecology of the Brain" 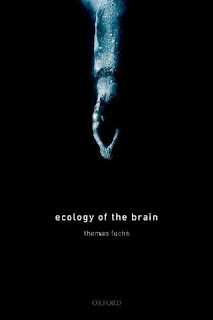 Thomas Fuchs (forthcoming)
Ecology of the Brain: The phenomenology and biology of the embodied mind.
Oxford, UK: Oxford University Press.

"Ecology of the brain" is a book that tries to understand the proper role of the brain as a part of the living organism. In the current neuroscience (or rather, neurophilosophy) there is a wide-spread tendency to overemphasize the importance of the brain, as if it were creating our authorship of actions, the sense of self, and the consciousness itself.

Although it is obvious that the brain plays an important role in our cognitive lives, the brain itself is originally an organ that is embedded in the living body. And the body maintains itself as a living being by interacting with its surrounding environment.

If so, as the author himself writes, the brain is to be understood as "an organ of relation and interaction: with the body itself, with the immediate environment of the organism, and with the social and cultural environment of the lifeworld." And this idea would re-explicate the relationship between "mind" and "brain." Both mind and brain would be regarded as dual aspects of the living being.

Focusing on the body itself, we notice that it originally has two properties. The body appears as a material thing on the one hand, but it appears as a living subject of experience on the other. In phenomenology, the former aspect of the body is referred to as "Körper (the material body)", and the latter as "Leib (the lived body)." In this regard, the primary locus of self-consciousness is not the brain, but the body. In terms of mind-body problem, the brain is a part of "Körper" and the mind corresponds to the functions of "Leib."

As I informed you already in this blog, I am going to organize an online reading group. In it, let us consider how the author opens up a new view on consiousness and cognition on the basis of his ecological view of the brain. Please send me an e-mail (shg.tanaka<a>gmail.com) if you are interested in joining the group.