I met a student who seemed to have a special kind of synesthesia.

Synesthesia is a mixture of sensations in which stimulation of one sensory system arouses automatic and involuntary sensations in another. There are two popular forms: colored-hearing synesthesia and grapheme-color synesthesia. In the former, sounds are experienced with colors when they are heard (e.g., seeing sombody's voice green), while in the latter, letters or numbers are perceived as inherently colored (e.g., the number 5 is red). There are also other forms of synesthesia but what is common to all forms is that there occurs the secondary sensation that is not supposed to be aroused physiologically.

In my student's case, a sight of static objects (people, animals, plants and things in general) induces the visual sensation of geometrical figures. For example, one photograph that I presented as a stimulation aroused him the figures like below. 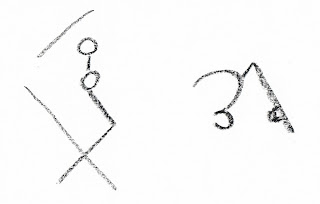 Most of the figures he 'sees' are abstract and geometrical. There seems to be no similarity between the shapes of objects and the figures he sees. His case is as strange as the case of 'the man who tasted shapes', reported by Richard Cytowic.
[Cytowic, R. (2003). The Man Who Tasted Shapes. MIT Press.]

Moreover, I've never heard of the synesthesia of this form. I am even not sure that this could be the synesthesia or not. If you have any information related to this phenomenon, please let me know. I hope to know if there is a case similar to his.
Posted by Shogo Tanaka at 8:55 PM