Another classical study on the theory of mind.

Baron-Cohen et al. (1985) appplied the false belief test to the study of childhood autism. They modified the details of the 'chocolate task' into 'Sally-Anne task' such as;

1.Sally places a marble into her basket.
2.Sally leaves the scene, and Anne transferred the marble and hid it in her box.
3.When Sally returns, the experimenter asks the question: "Where will Sally look for the marble?"
4.If the child points to the Sally's basket, she/he passes the false-belief test. 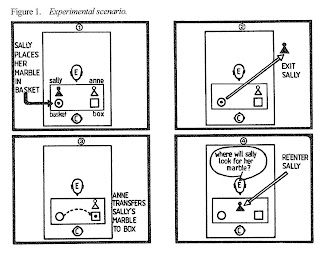 [O]ur results strongly support the hypothesis that autistic children as a group fail to employ a theory of mind. We wish to explain this failure as an inability to represent mental states. As a result of this the autistic subjects are unable to impute beliefs to others and are thus at a grave disadvantage when having to predict the behaviour of other people.
[op.cit., p.43]

[W]e conclude that the failure shown by the autistic children in our experiment constitutes a specific deficit. It cannot be attributed to the general effects of mental retardation, since the more severely retarded Down's Syndrome children performed clos to ceiling on our task.
[op.cit., p.44]

What is relly interesting here, I think, is not that the autistic child lacks the theory of mind but that the Down's Syndrome children performed similarly as the normal children. Down's syndrome children, who are thought to be 'severely retarded', can also pass the fals-belief test.

This fact implies that the theory of mind (or at least, understanding the false belief of others) is not such an intellectual operation as was thought at the beginning. The false-belief test can be answered more intuitively, without theoretical reasoning. So, the question I want to ask here is;

Is the theory of mind truly a theory?
Posted by Shogo Tanaka at 8:41 AM